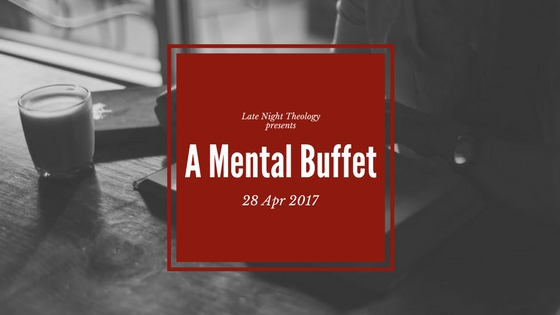 Some reading material for the eager mind and the hungry soul.

“We frequently face moral dilemmas. When neither neutrality nor nonaction is an option, when distinguishing what is purely right from what is purely wrong is impossible, what then? Sin bravely, says Luther. None of us can live the moral life as Pontius Pilate had wanted, namely, with clean hands. But the forgiven sinner loves her neighbor with dirty hands.”

“Regulating the watering hole becomes a compulsion, and a necessary work of the “Church.” Jesus’ love is for all is a confirmed fact, but we must have some standards of decorum and appropriate levels of conduct and respect. “We the keepers-of-the- spigot are called to take some responsibility in this,” we end up saying.”

“It may seem like everyone wants you or me to say something. But maybe it’s okay for you and I to admit that sometimes we don’t really have much to say.”

“The allure of polemics is the thrill. There’s an actual adrenaline kick when you’re breezily dismantling (at least in your own head) other people’s wrongness. There’s a feeling of control, of power, and, especially if this is a kind of Christianized sort, of doing God’s work. Being given a chance to feel smarter than someone else in the name of Jesus is an offer many of us can’t refuse.”

Error: Twitter did not respond. Please wait a few minutes and refresh this page.