The greatest threat facing the Church isn’t political Evangelicalism. It isn’t the loss of religious liberty, the Democrats or Darwinism. Our greatest threat isn’t George Soros, the “Gay Agenda”, or mainstream media. It isn’t Donald Trump, Arminianism, Dispensationalism, Federal Vision, or even John Piper’s really bad Sanctification views. The greatest threat we face is that we stop preaching the Gospel. The worst thing that we could do is to think that Christ is more glorified in something else. This includes social justice.

Yes, social justice is sexy right now. It is tangible, we can see who’s acting for justice and who isn’t. Caring for the poor, speaking up for those who are oppressed due to their race or socioeconomic condition; when we perform these works, they are true, tangible acts of mercy. To deny that we are called to perform these works is to outright deny one of the logical applications of the Gospel. The Gospel calls us to seek the justice of those around us.

But social justice isn’t the Gospel.

Which is essientially what Tim Keller tweeted yesterday. 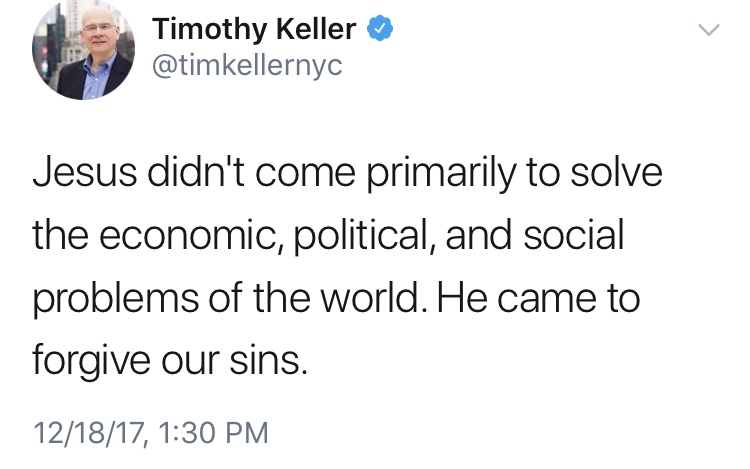 But judging by the response from the Mainline liberals (PCUSA, ELCA, Rachel Held Evans was pretty aggressive with it, but she wasn’t the only one) you’d have thought that Keller denied the virgin birth, the authority of Scripture, that homosexuality is a sin, and that miracles exist. I’m not saying the mainline liberals are making social justice a bigger issue than all of these. I’m just saying that’s apparently the hill to die on.

But isn’t it interesting that this is apparently the bill to die on. While they may all use this flowery language: “Christ didn’t come to merely forgive sins but also to bring shalom to all of creation and restore justice”. While that sounds really good they give up their hand. Mainline liberalism has not just denied the virgin birth, the reliability of Scripture, or the deity of Christ. They’ve denied the fundamental human problem. It’s not so much that you and I are sinners. That’s not the real issue. The real issue for them is all this injustice in the world. So then justification is not something Christ has done for us. It’s something he’s initiated that we must then work out. Granted that seems rather odd because the New Testament writers seem to have left that out. But this imperative driven call isn’t new. Isn’t it interesting? The same duty based, “do this because it’s the most important thing” psudeo-piety of the Mainliners is the same Pharisaical, don’t dance, drink, or chew, if there’s hair on your ears there’s sin your heart, legalism they hate in the Hyper-fundamentalists. They hate each other so much, but really they’re just cousins of the same imperative driven “gospel”.

While the mainline liberals will say “Don’t just stand there! Do something!” Christ calls out to us, “Don’t just do something! Stand there!” Stand strong, grounded that Christ has redeemed us; yes us as individuals. Stand firm! The Gospel not only matters, but is the only hope we have. Five years ago I was told I had no place in the Baptist Missionary Association partly because beer tastes good, but also because I had the nerve to tell the Dean of Spiritual Life at Central Baptist College that people weren’t preaching the Gospel in Chapel. I was called a “preaching snob” because I thought Scripture was more important than motivation speaking and “catching my vision”. But we shouldn’t give up the Gospel for motivational speaking and we shouldn’t give it up for social justice. Because motivational speaking or social justice isn’t the Gospel. It’s about time we started acting like it.