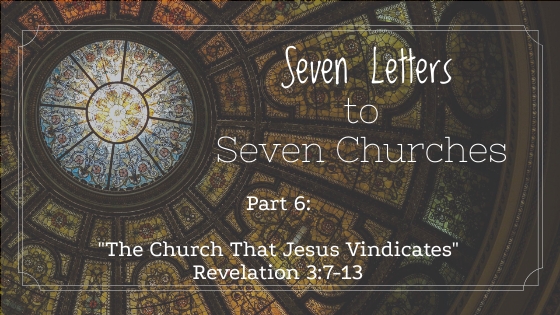 Almighty God, we bless You for the things we have read today concerning our Lord Jesus Christ. We pray that You would direct our meditations in light of the knowledge of Your glory in the face of Christ. We we would see Jesus, and it’s in His name we pray. Amen.

“Remember, therefore, what you have received and heard; obey it, and repent.”
– Revelation 3:3a, NIV84

“God is just: He will pay back trouble to those who trouble you 7 and give relief to you who are troubled, and to us as well. This will happen when the Lord Jesus is revealed from heaven in blazing fire with his powerful angels. 8 He will punish those who do not know God and do not obey the gospel of our Lord Jesus. 9 They will be punished with everlasting destruction and shut out from the presence of the Lord and from the majesty of his power 10 on the day he comes to be glorified in his holy people and to be marveled at among all those who have believed. This includes you, because you believed our testimony to you.” – 2 Thessalonians 1:6-10, NIV84

So, why am I bringing all this up? I feel after looking at today’s passage in Revelation 3:7-13 that the church at Philadelphia is one that has obeyed the Gospel.

So, first thing we’ll see here is how Jesus presents Himself to this church.

“To the angel of the church in Philadelphia write: These are the words of him who is holy and true, who holds the key of David. What he opens no one can shut, and what he shuts no one can open.” – Revelation 3:7, NIV84

First of all, we need to see Jesus’ character. Jesus is holy and true, and it’s for these reasons you can trust Him. Not only that, but He describes Himself as holding the key of David.

The Jews were using their election as a weapon, but it was in the plan of God the whole time to have a people worshipped and loved Jesus as their Messiah, and it all has to do with the fact that God loved us before the very foundations of the world were laid according to Ephesians 1.

He loved us before we even knew what love was.

James Burton Coffman does a really good job of summing up the situation in Philadelphia:

“Secular Israel is still in power [in this part of the world] over the Jews in a religious sense, still pretended to have final right of determining who should or should not enter heaven, sternly resisting the claims of the Christians that they, the Christians, were the true Israel of God. To enforce their claims, the Jews cast out of their synagogues all Jews who accepted Christ… This passage emphasizes the truth that, “It is Christ alone… who can give men entrance into the messianic kingdom.” “Christ speaks as He by whom alone comes entrance to the Church, the spiritual house of God.” The imagery of “key of David” and other expressions here is from Isaiah 22:25, where the king of Israel deposed Shebna and appointed Eliakim as the chief-steward.” – James B. Coffman

The implication is clear: Jesus is showing the church at Philadelphia that He is the true king, and He holds the key of David.

Jesus hasn’t sustained this church since 1883 just so we can have a neat little place for our family. This church isn’t simply for our individual families, it’s for His one big family, and we have an opportunity to invite more people into the family of God.

“I know your deeds. See, I have placed before you an open door that no one can shut. I know that you have little strength, yet you have kept my word and have not denied my name.” – Revelation 3:8, NIV84

I think the second part of verse 8 is very profound – “I know you have a little strength.”

“The apostles said to the Lord, “Increase our faith!” 6 He replied, “If you have faith as small as a mustard seed, you can say to this mulberry tree, ‘Be uprooted and planted in the sea,’ and it will obey you.”
– Luke 17:5-6, NIV84

So, what’s the idea that Jesus is communicating? He’s telling us that our faith isn’t based on how we feel or how big it may be. It’s not about the size of our faith, it’s about the object of our faith.

Jesus commends them more by saying, “yet you have kept my word and have not denied my name.”

They’re not like the church at Sardis that blends in so well that they’re not persecuted. They’re not compromising like Thyatira. They are faithful.

So, if we’re going to be faithful like them, what do we need to do?

When Mark Driscoll started Mars Hill Church in Seattle it, they didn’t start the church with the intention of it being a big church. They just wanted to start a Bible study because there weren’t that many churches up there to begin with, and the few churches there were, didn’t even act like they believed in the authority of Scripture.

They interviewed a newly married couple that started attending there not to long after Mars Hill started and the husband said, “I’ve been church since I was a little kid and this is the first place where the pastor actually reads more than half a verse when he preaches.”

Jesus tells the Church at Philadelphia at the end of verse 8, “you have kept my word, and have not denied my name.”

This means that the message we preach is Jesus. Paul said we preach Christ crucified. That’s it! (1 Corinthians 1:23) The Gospel of Jesus Christ is the only way that people are saved, and if they turn their backs on us and reject us let be because they are rejecting Jesus.

I am reminded of what Paul said in his introduction to Romans.

“Paul, a servant of Christ Jesus, called to be an apostle and set apart for the gospel of God  2 the gospel he promised beforehand through his prophets in the Holy Scriptures 3 regarding his Son, who as to his human nature was a descendant of David, 4 and who through the Spirit of holiness was declared with power to be the Son of God by his resurrection from the dead: Jesus Christ our Lord. 5 Through him and for his name’s sake, we received grace and apostleship to call people from among all the Gentiles to the obedience that comes from faith.” – Romans 1:1-5, NIV84

This is what it means to be faithful to His name!

And the most beautiful part is that the Gospel is not God’s Plan B! Satan was already defeated as soon as he got Eve to partake of the forbidden fruit.

So far, we’ve looked at Christ’s Character, and Christ’s Commendation, but now we’re going to see The Church’s Vindication.

“I will make those who are of the synagogue of Satan, who claim to be Jews though they are not, but are liars – I will make them come and fall down at your feet and acknowledge that I have loved you.” – Revelation 3:9, NIV84

If you remember, when we covered The Church in Smyrna, in Revelation 2:8-11, the problem there as well was that there were these people who were Jews and Jesus says they are of the synagogue of Satan. Jesus says that they claim to be Jews and they are not.

This church is living in Philadelphia, among a people thrive on oppressing them, and yet, Jesus says that these false Jews will fall at their feet and acknowledge that Christ has loved them as His own people.

I think Sam Storms is spot on here when he says, “Literally, Jesus says he will “give” these false Jews of the synagogue of Satan to the church at Philadelphia, i.e., he will cause them to bow down at their feet and to know that Jesus has loved them. Does this imply that these Jewish opponents will become Christians? Some say Yes and contend that the “open door” of v. 8 pertains specifically to evangelistic opportunity and success among the Jewish population of the city.[1]”

Oppression in any form is an opportunity to love our enemies and share the Gospel with them.

One of the most interesting things about verse 9 is if you know the Old Testament fairly well, then you remember that there are many promises about the Gentiles coming to bow down before Israel in the last days, like in Isaiah 60:14 where it says “they” (the Gentiles) will call “you” (the Israelites) “the city of the Lord, the Zion of the Holy One of Israel” and yet, here in Revelation 3:9, Jesus seems to be saying the opposite that these Jews are going to bow down at the feet of these believers.

But what Sam Storms believes is that what the Old Testament prophets like Isaiah saw was the fulfillment of the Church as God’s people, and that there will be Jews who come into the Church because they finally see Him as their Messiah and their Savior.

And this is ultimately our goal. We want people to see Jesus in us, and realize, as Augustine said, that’s there’s a God-sized hole in their hearts and only Jesus can fill it.

Maybe you’re here this morning, and you realize your need for Jesus.

Maybe you already see your need for Jesus and you’re already following Him faithfully, but you need more power, more strength, and more encouragement.

I’m not going to walk you through the Sinner’s Prayer or have you sign a card, but I will pray for you and with you if you would like. We have elders here who will pray with you and for you.

Maybe you need healing, we believing in anointing with oil, and we believe that the effectual fervent prayer of a righteous man availeth much, and that the prayer of the faith shall save the sick.

Heavenly Father, we think about the promise You spoke to your prophets when You said, “I will be their God, and they will be my people” and we think, “That’s us? Really? We’re the best You could come up with?” But we quickly realize that You didn’t choose us because we were the best or even because we were good, but You chose us in Christ before the foundations of the world because You loved us. We don’t have to understand it, but we have to accept it for what it is.