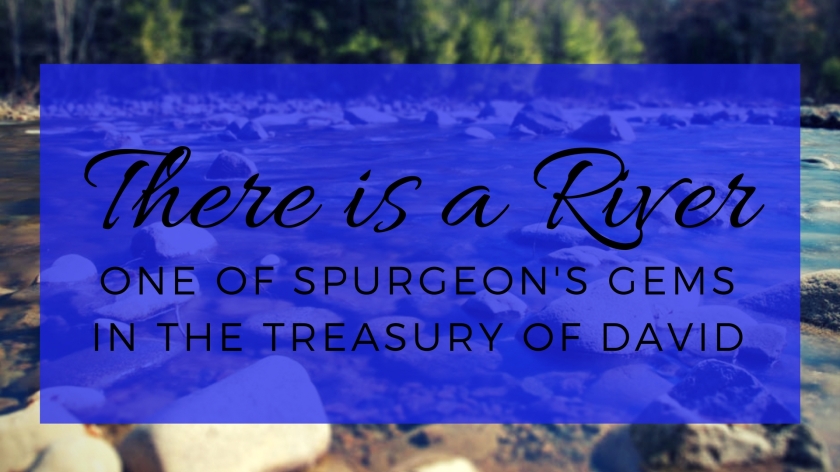 “There is a river whose streams shall make glad the city of God,
The holy place of the tabernacle of the Most High.”
– Psalm 46:4, NKJV

The Treasury of David by Charles Spurgeon is laced with many a gem. The following is once such a gem in commentary over the 46th psalm.

There is a river. Divine grace like a smoothly flowing, fertilising, full, and never failing river, yields refreshment and consolation to believers. This is the river of the water of life, of which the church above as well as the church below partakes evermore. It is no boisterous ocean, but a placid stream, it is not stayed in its course by earthquakes or crumbling mountains, it follows its serene course without disturbance. Happy are they who know from their own experience that there is such a river of God. The streams whereof in their various influences, for they are many, shall make glad the city of God, by assuring the citizens that Zion’s Lord will unfailingly supply all their needs. The streams are not transient like Cherith, nor muddy like the Nile, nor furious like Kishon, nor treacherous like Job’s deceitful brooks, neither are their waters “naught” like those of Jericho, they are clear, cool, fresh, abundant, and gladdening. The great fear of an Eastern city in time of war was lest the water supply should be cut off during a siege; if that were secured the city could hold out against attacks for an indefinite period. In this verse, Jerusalem, which represents the church of God, is described as well supplied with water, to set forth the fact that in seasons of trial all sufficient grace will be given to enable us to endure unto the end. The church is like a well ordered city, surrounded with mighty walls of truth and justice, garrisoned by omnipotence, fairly built and adorned by infinite wisdom: its burgesses the saints enjoy high privileges; they trade with far off lands, they live in the smile of the King; and as a great river is the very making and mainstay of a town, so is the broad river of everlasting love, and grace their joy and bliss. The church is peculiarly the City of God, of his designing, building, election, purchasing and indwelling. It is dedicated to his praise, and glorified by his presence. The holy place of the tabernacle of the Most High. This was the peculiar glory of Jerusalem, that the Lord within her walls had a place where he peculiarly revealed himself, and this is the choice privilege of the saints, concerning which we may cry with wonder, “Lord, how is it that thou wilt manifest thyself unto us, and not unto the world?” To be a temple for the Holy Ghost is the delightful portion of each saint, to be the living temple for the Lord our God is also the high honour of the church in her corporate capacity. Our God is here called by a worthy title, indicating his power, majesty, sublimity, and excellency; and it is worthy of note that under this character he dwells in the church. We have not a great God in nature, and a little God in grace; no, the church contains as clear and convincing a revelation of God as the works of nature, and even more amazing in the excellent glory which shines between the cherubim overshadowing that mercy seat which is the centre and gathering place of the people of the living God. To have the Most High dwelling within her members, is to make the church on earth like the church in heaven.