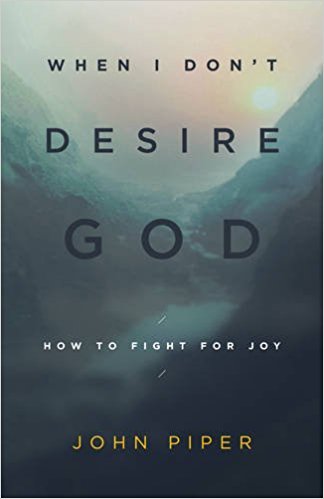 My cohort and partner in crime on the Late Night Theology podcast, Tom, has accused John Piper many times of simply telling us to desire God without giving us real applicable steps to do so. Let me just say that I love John Piper and that his ministry has been a real influence on my ministry for the last 7 years, but (and this is a big ‘but’ *gigglesnort*) if I’m being honest, I feel that those accusations are a little more than justified. So, for the new few weeks (months, maybe? A year if I get lazy or busy), I’ll be reading a chapter at a time of “When I Don’t Desire God” by John Piper and I hope to either confirm these accusations against Piper or deny them.

This is my review of Chapter 1.

This chapter is mostly information about the concept of Christian Hedonism and why it’s important. Like the beginning of most books, Piper is just giving us some introductory information to work with and keep in the back of our minds as we trek through the rest of this tome of Christ-centered joy.

There are two things I really appreciated in this chapter and I want to take the time to address each of them individually. First, I think, and I could be wrong, but I think John Piper acknowledges that there are Christians who do not desire God, and secondly he supports that the doctrine of Christian Hedonism is not something that he just came up with out of thin air, but rather is something that has been taught all through Church History.

The Christians That Don’t Desire God

Here’s a lengthy quote from the top of page 15 under a section titled, ‘The Most Common Question I’ve Received.’

“This is why the most common and desperate question I have received over the last three decades is: What can I do? How can I become the kind of person the Bible is calling me to be? … Many are persuaded. They see that the truth and beauty and worth of God shine best from the lives of saints who are so satisfied in God they can suffer in the cause of love without murmuring. But then they say, “That’s not who I am. I don’t have that kind of liberating, love-producing, risk-taking satisfaction in God. I desire comfort and security more than God.” Many say it with tears and trembling.”

Even though Piper does not come right out and say that these people are not Christians, I believe that he’s under the impression that those who say that they don’t desire God with tears in their eyes and say that they don’t have “that kind of liberating, love-producing, risk-taking satisfaction in God” are not saved. However, I believe the whole reason those people have tears in their eyes is because they are believers, and it hurts them that they don’t desire God more. The unregenerate man either believes that he desires God adequately or doesn’t care that he doesn’t desire God on this level. I don’t believe any regenerate person looks at how their living out their religion and says, “what I’m doing is good enough.”

Piper will go on to imply that the answer is conversion as stated under a heading in the chapter that he has titled, “Conversion is the Creation of New Desires.” In this theologian’s opinion, conversion might be needed, but not in every situation. What is most definitely needed is a revival of the soul. If we reach this place where we don’t desire God as we once did, then we need a baptism of joy. We need to cry out with the Psalmist, “Restore to me the joy of Your salvation.” (Psalm 51:12a, NKJV)

A Historical Legacy of Christian Hedonism

One of things that I really appreciate about this chapter is that Piper isn’t just pulling this Christian Hedonism thing out of the air. He feels that this is something that Puritans, Reformers and Patristics all taught and he goes out of his way to prove that by giving us quotes from Saint Augustine, John Calvin, Thomas Watson, Jonathan Edwards, Charles Hodge, and others.

Missions are important; martyrdoms are bad, but I don’t have to be reminded about it every five minutes to have a healthy relationship with God. As long as Piper keeps these references to minimum, I think the rest of the book will be okay.

On the rating scale, I’ll give this chapter a 3.5 out of 5 beard strokes.